Alphabet Soup and Hunting Vests: Canada's Race to the Bottom

In the spring of 2006, when Stephen Harper met with George Bush and Mexican president Vicente Fox, in Cancun; he was there to intensify trade talks between the three countries, in particular the controversial Security and Prosperity Partnership.

Believing that the Canadian media would be all over it, and he might have to answer questions about the details of any deals, he showed up for the first press conference, wearing of all things, a hunting vest.

And true to form, the media forgot all about the important summit and focused on that damn vest.

The Globe and Mail asked : Stephen, what the heck are you wearing? Ceri Marsh, editor-in-chief of Fashion magazine in Toronto, sighed deeply into the phone. "Oh, this is bad. This is terrible. Fox looks great. Bush is fine. But Harper is a total embarrassment. He looks like their assistant. Could he not do his zipper up? It looks like his belly is too big. And I believe those appear to be pleated brown trousers. No one has worn those in 10 years.

Jeff Farbstein, vice-president of Harry Rosen, all but howled in disgust. "He's wearing a utility vest!" he lamented. Asked for some professional fashion advice, Mr. Farbstein barely knew where to begin. "He's not the best-dressed guy to begin with, but this is obviously an important international event. One of his consultants should have told him what to wear, and how. If he were wearing a beige cotton suit with no tie and a crisp linen shirt, that would have been the way to go.

The Ottawa Citizen suggested: Harper's big game hunter look a fashion faux pas, expert says Sartorial note to Prime Minister Stephen Harper: lose the vest. And get an assistant to do what high school girls do -- find out ahead of time what everyone will be wearing.

The headlines across the country were much the same. But you'd be very hard pressed to find information on the talks, or decisions made on our behalf. It's what David McGowan might call the Politics of Illusion or better yet, a bit of Morton Blackwell's conservatism 101: "Controlled Controversy".

We didn't see cunning, we only saw doofus. And if we thought of him as a doofus, or a country bumpkin, how could we possibly believe that he was there representing the interests of the world's largest multinational corporations?

“Think of the press as a great keyboard on which the government can play.” Joseph Goebbels

Free Trade and the Decline in Democracy

Citizens beware. An unprecedented corporate power grab is underway in global negotiations over international trade. Operating under the deceptive banner of "free" trade, multinational corporations are working hard to expand their control over the international economy and to undo vital health, safety, and environmental protections won by citizen movements across the globe in recent decades. The megacorporations are not expecting these victories to be gained in town halls, state offices, the U.S. Capitol, or even at the United Nations.

They are looking to circumvent the democratic process altogether, in a bold and brazen drive to achieve an autocratic far-reaching agenda through two trade agreements, the U.S.-Mexico-Canada free trade deal (formally known as NAFTA, the North American Free Trade Agreement) and an expansion of the General Agreement on Tariffs and Trade (GATT), called the Uruguay Round. (1)

GATT was signed in 1947 to encourage free trade between member states, by regulating and reducing tariffs on traded goods and by providing a common mechanism for resolving trade disputes. There were many clauses to the agreement, including a Most-Favoured-Nation Treatment, that Diefenbaker tapped into, that allowed Canada to export oil to the U.S., avoiding the Mandatory Oil Import Quota Program, introduced by Eisenhower in 1959.

In exchange we allowed multinationals in Montreal to continue to import oil from Venezuela and the Middle East, at a lower cost, while Ontario was forced to buy oil from Alberta at a 33-50% higher price. The importing of oil from these places, kept the U.S. from getting into trouble with these trading partners over the Canadian exceptionality. 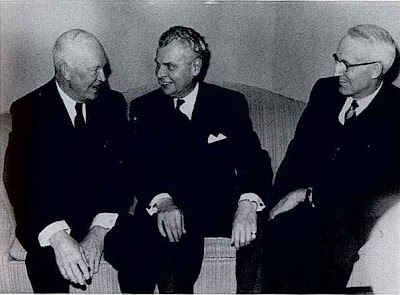 GATT expanded over the years, but the Uruguay Round of 1986, was the most comprehensive deal since the initiative began. For the first time things like services, capital, intellectual property, textiles, and agriculture were added.

The Fortune 200's GATT and NAFTA agenda would make the air you breathe dirtier and the water you drink more polluted. It would cost jobs, depress wage levels, and make workplaces less safe. It would destroy family farms and undermine consumer protections such as those ensuring that the food you eat is
not compromised by unsanitary conditions or higher levels of pesticides and preservatives. (1)

But that's only for the industrialized countries. The large global companies have an even more ambitious set of goals for the Third World. They use GATT and NAFTA to capitalize on the poverty and exploit their generally low environmental and safety standards, and low wages, to increase profits. And they do this in part by playing one off against the other.

A bidding war where the prize is the one who allows foreign investment with the least expected return. It's like the old colonialism, where workers are slaves. And even if you are unconcerned with those being oppressed, remember, the more jobs outsourced the fewer there are here.

And if you think that bullying is not our way and that Canada would never be privy to such things, guess again. Stephen Harper and Jim Flaherty have been doing a lot of bullying lately, using Canada's once excellent international reputation to exploit disadvantaged nations.

At the WTO, Canada heads a group of delegations pressing developing countries to open their economies to the supposedly superior services of foreign financial institutions. The world's major financial conglomerates are claimed to have sophisticated risk management capabilities that can stabilize economies. You might think these days such a claim would not pass the laugh test, but that did not stop financial liberalization from being pushed at the WTO ministerial meeting held in July 2008.

The enormity of what's at stake in the WTO financial sector negotiations is revealed in a February 2006 bargaining request sent from Canada's Department
of Finance to developing countries. Canada asked that foreign financial institutions be guaranteed rights to "establish new and acquire existing companies" in all financial sectors. This would mean among other things that countries would have to allow 100 per cent foreign ownership of their banks and insurance companies. (2)

They are demanding that they allow "100 per cent foreign ownership of their banks and insurance companies". Exploiting countries that need trade and financial assistance to survive.

And it's all been done in almost total secrecy, which is exactly the way it's supposed to be done. Ralph Nader knew it in 1993:

The Uruguay Round expansion of GATT and NAFTA would establish a world economic government dominated by giant corporations, but they do not propose a democratic rule of law to hold this economic government accountable. It is bad enough to have the U. S. Fortune 200s along with European and Japanese corporations effectively ruling the Seven Seas of the marketplace, which affects workers, the environment, and consumers. But it is a level of magnitude worse for this rule to be formally expanded over entire political economies without any democratic accountability to the people.

Secrecy, abstruseness, and unaccountability: these are the watchwords of global trade policy-making. Every element of the negotiation, adoption, and implementation of the trade agreements is designed to foreclose citizen participation or even awareness. (1)

So when the 2006 summit took place he controlled the media. Later, in 2008 at Montebello, he controlled us. All to "foreclose citizen participation or even awareness".

We are being sold off to the highest bidder, and the saddest part is, we don't even know it. But the good news is that we are winning the race to the bottom.