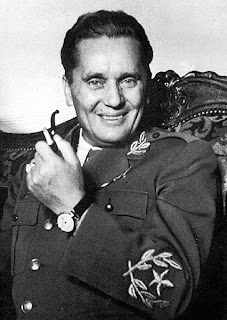 He liked greenhouses. So he built himself a greenhouse. He used to rest there, among the poinsettias and the cactuses, like an old lizard in the sun. Now they have buried him in the greenhouse, in front of his residence in Belgrade. There is a large white marble slab, with bronze lettering which reads Josip Broz Tito, 1892-1980.

No one much visits any more, and the place is neglected. On the day I visit it is raining, and rain is dripping from a broken skylight on to the Marshal's grave. Nobody cares. On his birthday in 1945, some teenagers ran a relay race from Kragujevac to Belgrade and presented him with a baton. Every year of his reign, the 'youth' of Yugoslavia repeated that race, and at the end of it they presented the old dictator with the relay batons. His birthday became 'Youth Day'. Twenty thousand batons are kept in the museum next to his grave. Nobody visits the batons any more.

How quickly the legitimacy of power drains away. The batons were not ridiculous twenty years ago. The relay race meant something to people. Now it seems to belong to the rites of some vanished tribe. (1)

Many of those youth so devoted to Tito, belonged to the Union of Pioneers of Yugoslavia. Like the Hitler Youth before them, they wore uniforms, but if Tito himself was paying a visit they dressed in traditional costume.

And one of "Tito's Pioneers" was a young man named Vilim Zlomislic. His father had been one of 'Partisans', the resistance fighters led by Tito himself. But he was killed fighting against the German occupation and Vilim's mother Rose was captured and transported to Germany in 1943 to work as slave labour for the Nazis, while young Vilim was placed in an orphanage.

Rose would survive the war and eventually marry a Canadian, Frederick Andrews, who was then working for a United Nations agency in a German displaced persons' camp. The couple moved to Toronto, but Rose never gave up looking for her son, even after she was told that he had been killed in an air raid.

Her perseverance paid off, and with the help of the Red Cross she was reunited with the ten-year-old Vilim, and immediately had him re-Christened, Donald Clarke Andrews, leaving their past behind for good. "As a youth, he was an excellent student who liked to read. He attended Ryerson Polytechnical Institute under a scholarship and, in his spare time, volunteered with various social democrat groups". (2)
But by the late 1960's he began to grow alarmed by Soviet expansionism, and became a dedicated anti-Communist and his life would change forever.

Don Andrews, through the Edmund Burke Society and the Western Guard, dominated the extreme right-wing stage in Toronto for most of the decade and became a sort of godfather to many of the present-day organizers of the Klan. "Many of them were my lieutenants in the Guard," he boasted ...

"I'm not upset if you call me a fascist," he once told a reporter. He worked in the Scarborough public health department and later at Toronto East General Hospital. Andrews, by his own admission, received money from right-wing sympathizers in the Serbian and other Eastern European immigrant communities. Neatly attired in business suits, Andrews was intelligent, well-read and eloquent.

In his six years as Guard leader, his penchant for violence seemed to be matched only by his political and organizational cunning. As a candidate in Toronto's mayoralty race in 1972, he polled 1,916 votes. Running again in 1974 on a white power ticket with his name on posters plastered across the city, he came in second in a field of eleven, with close to 6,000 votes. Andrews's political career did not come to an end when he was sentenced in 1978 to a brief jail term and forbidden to associate with the Guard. (3)

And of course that was the same Western Guard to which Alex McQuirter and Wolfgang Droege belonged.

Andrews and another Western Guard member, David (Tarzan) Zarytshansky, dreamt up a plot to launch a terrorist bomb attack on the Israeli soccer team during an exhibition match at Varsity Stadium.

Hearing this, Droege, who had been chafing under Andrews's dictatorial leadership style, was unimpressed. "By this time," he says, "I was getting pretty fed up, because I was starting to see what Andrews was all about. So I just conveniently left town because I didn't want to be any part of it. So I went fishing that weekend."

When he returned, Droege spotted the handcuffed Andrews and Zarytshansky on the evening news, being led away to the Don Jail by RCMP officers. The pair had been turned in by a paid informer. At his trial in late 1977, Andrews testified that non-whites were "human and organic garbage" and added, for good measure, that he possessed "a general dislike of Jews." He received two years in a federal penitentiary, while Zarytshansky received an I8-moth sentence in a provincial facility.

"After he was arrested," Droege says-of Andrews, "he was not allowed to be involved in the Western Guard any more. So he was gone for two years." (2)

It was at this time that Droege and McQuirter began to look into creating a KKK group in Canada. Andrews* would go on to found the Nationalist Party of Canada, which is still in existence. He also runs in every mayoral race in Toronto, including the last one. 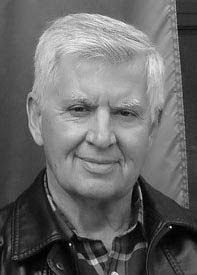 My friend and I met him at his home. It was nice place around the Beach, and full of paintings (one was by a member of the Romanovs, he said.) There was also a
Swastika and a painting of SS soldiers on his wall. His teenage daughter was there too--a polite and kind looking girl.

"I'm running to give the white people an opportunity to express their views," he told me. The media "is always trying to shut you out; it's run by the Jews of course." I asked him whether he considers himself a Nazi, and he told me he's a racist first. "Call me what you want, just not late for dinner," he joked.

Andrews insisted he doesn't hate other ethnic groups, and said that "racism is for everyone." He expects people of different ethnicities to stay together. "It's about a sense of belonging," he concluded. (3)