Chapter Thirty-Eight Continued: Sunshine Boys and a Flash in the Pan 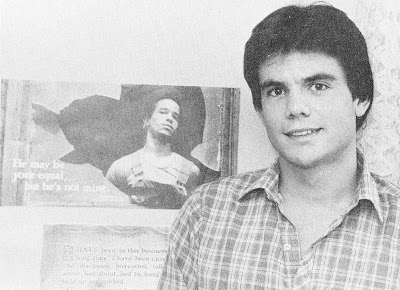 The Toronto Sun became famous for their 'Sunshine Girls', and in 1972, under pressure from female readers, they introduced their first ever 'Sunshine Boy'.

Over the years, the daily Boy has featured the likes of Mark Messier, Rod Stewart, Ravishing Rick Rude and Mike Tyson. Besides, of course, the best Toronto has to offer. (1)

In 1980 one of those Sunshine Boys was James Alexander McQuirter, whose picture was published under the name Jim. "He'd like to find himself a seat on Parliament Hill," read the caption under his photograph. (2)

According to former colleague Robert Smith: "I worked with Jim McQuirter, the only Canadian Klansman to become a Toronto Sun "Sunshine Boy" We nicknamed him "Media Man," after a song by the 1980's band Flash in the Pan*". (3)

McQuirter would go on to lead the Canadian chapter of the KKK but it was a long journey.

James Alexander "Jim" McQuirter was born in May of 1958, the eldest of five children, to a middle-class family in North York. At the age of 14, he began reading hate literature, that he tried to share with fellow students at York Mills Collegiate, hoping to convert his peers. His parents were less than impressed and forbid his discussing racial issues at home, so he took to streets to find kindred souls.

In 1975, when just 16, he met Wolfgang Droege and the two became instant friends.

Recalls Droege: "McQuirter was a very smart fellow. He was young, articulate and intelligent. Very capable, with a lot of ideas. We met, and we started to form a close friendship. (4)

McQuirter joined the Western Guard while still in his teens and describes his decision to get involved in far-right causes:

James Alexander McQuirter was attracted to Don Andrews's organization while still in his teens. His background was different from that of his fellow Guard members, many of whom seemed to have inherited their fascist leanings from their European families or experiences ... [and claimed to have come from a "liberal, middle class" home in the Toronto borough of North York. At "about 14 or 15" years of age McQuirter, through his own readings, became convinced of the inferiority of blacks and Jews and started to try and win his friends at York Mills Collegiate over to his beliefs: "I was always a conservationist. When I was going to high school, I was interested in the whales and seals. Then I started reading about some of the population statistics of the white race. We're a dying species. I used to talk to other conversationists about this, but they weren't interested — it was all racist stuff to them. But at the time, I wasn't a racist. I just thought, well, gee, everything should be protected.**

So I was forced to look at different groups, so-called right-wing fanatical groups. I was interested in what they had to offer, what their solutions were." McQuirter's parents apparently did not take too kindly to their son's new ideological bent, and he was told by his parents not to talk about the race question at home. "Today, I don't see any of [my parents] very much," he said in one newspaper interview. "Let's say they don't agree with me." After he graduated from high school, McQuirter spent four years in the Canadian militia [then] joined up with Don Andrews "... the Western Guard was the only game in town," McQuirter explains. Andrews was instrumental in fleshing out the style and substance of the young McQuirter's right-wing politics. 1 remember McQuirter coming to my house in the early days when he was about 18," recalls Andrews. "He used to come into my back yard and we would discuss organizational and political things. McQuirter didn't really know how to speak to the press all that much because he didn't have much background knowledge on political, international and other racial matters. So we would chit-chat and I would give him some pointers on how to answer some questions."" (4)

But McQuirter and Droege would eventually become disillusioned with Don Andrews.

We had the same feelings about Andrews. We felt he was trying to play this role of dictator and that he was not interested in working for our race or the advancement of our race. He just wanted a group so he could be the boss of it. He just wanted to be a mafia don." Andrews, not surprisingly, rejects this criticism: "A lot of Germans have an attitude problem when it comes to the right wing. They want to be in charge of everything—and, if they were, they would just go and lose it a third time." He pauses. "He got to be buddies with McQuirter, who wanted to do all sorts of wild things. Wolf assisted him in that." (5)

McQuirter certainly did want to do all sorts of "wild things".

In September 1976, Wolfgang Droege, John Ross Taylor and McQuirter attended David Duke's International Patriotic Congress of neo-Nazi and white supremacist groups in New Orleans, and the plan was hatched to start their own Klan.

Continued: From Partisans to Pioneers

*The band also became a flash in the pan