Taking Control of the Conversation by Eliminating the Noise

" ... we refuse to believe that the bank of justice is bankrupt. We refuse to believe that there are insufficient funds in the great vaults of opportunity of this nation. And so, we've come to cash this check, a check that will give us upon demand the riches of freedom and the security of justice. We have also come to this hallowed spot to remind America of the fierce urgency of Now. This is no time to engage in the luxury of cooling off or to take the tranquilizing drug of gradualism. Now is the time to make real the promises of democracy. Now is the time to rise from the dark and desolate valley of segregation to the sunlit path of racial justice. Now is the time to lift our nation from the quicksands of racial injustice to the solid rock of brotherhood. Now is the time to make justice a reality for all of God's children." - Martin Luther King Jr.

The above was part of a speech made by Dr. King on August 28, 1963, from the steps of the Lincoln Memorial, during the March on Washington for Jobs and Freedom. It has become a defining moment of the American Civil Rights Movement.

Many people believe that the Religious Right or Moral Majority, came about because of Roe vs Wade, the case that legitimized abortion. But it did not. It was created in response to the civil rights movement. According to Rabbi Caryn Broitman, it was knee jerk to:

... the Supreme Court decision that ruled that institutions that practiced segregation would forfeit their tax exempt status. This decision led to the withdrawal of tax-exempt status for Bob Jones University, who among other things, did not admit Blacks, and when they did, had a policy against interracial dating. It was race, as well as the desire to maintain control over evangelical institutions, and not abortion, that led to the establishment of the religious right. (1)

This was a shame, because it was the exact opposite of anything true Evangelicals ever stood for:

In fact, before the civil war Evangelicals in the North were leading progressives whose piety gave rise to abolitionism, the female seminary movement, and prison reform. William Jennings Bryan, one of the most famous evangelicals, devoted himself to causes such as the Peace Movement and women’s suffrage and was a leading proponent of the progressive income tax. (1)

But in the same way that the Religious Right hijacked the Republican Party in the United States, they have also hijacked Evangelism, turning it into faith based hatred.

And while the majority of Evangelicals do not follow this dogma, the only ones being heard, are those making all the noise. 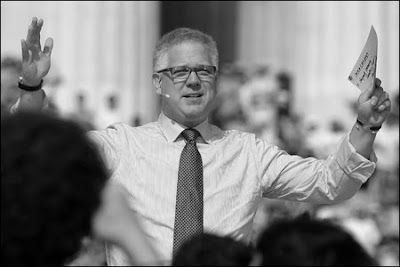 This year on the anniversary of Martin Luther King's "I Have a Dream" speech, Glen Beck from Fox News organized a "Restoring Honor" 'Tea Party' march, declaring that President Obama was not doing enough to unite the country.

The sentiments were honorable, but the rhetoric was subterfuge. This was a predominantly white people's march against a black president. And in the same way that the original Boston Tea Party was a merchant's revolt against paying taxes, this was a corporate funded revolt against the proposed removal of George Bush's massive corporate tax cuts.

Nothing more, nothing less.

It is Republican political strategy. Advance your cause by exploiting those who will be hurt the most by corporate greed.

And while the majority of Americans do not follow this policy, the only ones being heard, are those making all the noise. 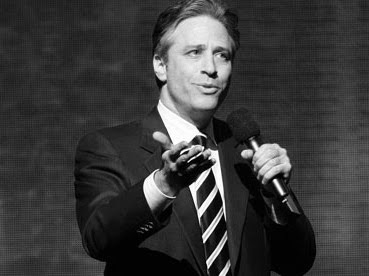 Stewart's event is designed is to counter what he called a minority of 15% or 20% of the country that has dominated the national political discussion with extreme rhetoric. News of Stewart's rally came at the end of an extraordinary week. It began with a narrowly avoided Qur'an-burning on the anniversary of the 11 September terrorist attacks and ended with former Alaska governor and right wing darling Sarah Palin stoking suspicions that she will run for the White House in 2012. (2)

His country is in big trouble and he has recognized that the only ones being heard, are those making all the noise. 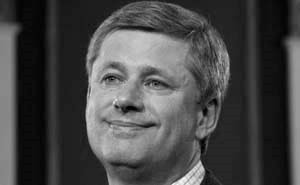 Canada is not only being threatened by Fox News North, but by the Tea Party North, as the only screeching voices belong to the likes of Kory Teneycke, Ezra Levant, John Baird and Dean Del Mastro. And the only noise is coming from our own Religious Right, inspired and financed by the American Religious Right. And the noisy voices of the gun lobby, inspired and financed by the U.S. NRA, are taking on our values as a peaceful country.

We need to steer the conversation from guns, prisons and fighter jets, to issues that are important to us. Things like health care, and an aging population. Homelessness, child poverty. And rights. Basic human rights that guarantee equal treatment for us all, regardless of race, religion or gender.

Will we continue to allow the Harperites to monopolize the conversation, and demonize anyone who doesn't agree with them? Haroon Siddiqui is right. Stephen Harper needs to be dethroned. But that's not enough.

Canadians need to find their voices, or risk having them drowned out by too much noise.

1. Yom Kippur Sermon 5769: A critical analysis of the Jewish alliance with the Christian Right regarding Israel, By Rabbi Caryn Broitman, Yom Kippur 2008