I attended an all candidates meeting in Kingston last week, where several individuals are vying for the Liberal nomination, to replace Peter Milliken. When it came around to taking questions from the floor, I asked what each one would do to help restore democracy to Canada.

The first person answered simply "get rid of Stephen Harper". Of course everyone laughed but it was not really what I was looking for. In fairness, it was too big a question, when the contestants had no more than 30 seconds to give a response.

One of my favourite journalists, Murray Dobbin, posted an excellent piece on his blog this week, where he suggests that we are now in the fight of our lives.

Individuals and organizations in Canada who recognize that the most critical short term political goal we have is to rid the country of Stephen Harper’s government might want to engage in a kind of political and strategic triage: what are the three or four key issues that we need to focus on to expose Harper’s agenda and to exploit his weaknesses? (1)

While there is no argument that Harper must go, he is only a symptom of the disease that has been eating away at us for years.

It has been like a slow growing cancer, that while it left us weak, did not dramatically hinder our ability to function as a sovereign nation. Then along came Harper and the cancer spread so rapidly that our freedoms are now on life support, with only minimal brain function. And we are indeed in "the fight of our lives".

Stage One: The Erosion is Small and Contained

"A society only articulates itself as a nation through some common intention among its people." George P. Grant*, Lament For a Nation

Sir John A. MacDonald, Canada's first prime minister, was not only one of the people responsible for Confederation, but he also sought to create a unique Canadian identity, while fighting against the influence of the United States. This brought about the character of 'Johnny Canuck', who appeared in political cartoons for decades.

We were the little guy, youngest cousin of Uncle Sam and John Bull. A little naive perhaps, but strong and ready to stand up to the big boys. And this sentiment continued throughout the life of 'Johnny'. 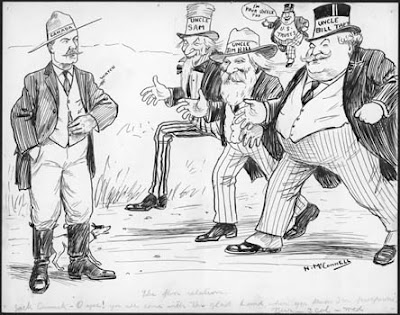 But then Johnny Canuck caught a bug. Murray Dobbin believes that it was 38 years ago (1), when the Conservatives came to power in Alberta, but I believe it was earlier than that, and simply went undiagnosed for decades.

I think the bug that now threatens our existence, first appeared on February 13, 1947, in the oil that was discovered at Leduc in Alberta. Canada then caught the attention of Texas oilmen, and the premier of Alberta, Ernest Manning, became their new best friend. So much so, that Time Magazine began to refer to Alberta as Texas of the North. (2) Other discoveries in post-war Canada of iron ore, nickel, copper, uranium and titanium, also brought us to the attention of southern corporate interests.

Stage Two: A tumour has developed But Has Not Spread Into the Surrounding Tissue

"The imperial power of corporations has destroyed indigenous cultures in every corner of the globe." George P. Grant*, Lament For a Nation

A series of trade agreements followed, based on the needs of the corporate sector, who, as George Grant claimed, "sought to master nature and reshape humanity." (3) Successive Canadian governments, began to work with the corporate sector to develop our natural resources, and in many ways it was a good thing.

But then prime minister St. Laurent introduced legislation to have the Canadian government lend $80 million to the U.S.-controlled Trans-Canada Pipe Lines Ltd., to build a pipeline from Alberta to Winnipeg in order to export natural gas to the United States. This gave the new conservative leader Diefenbaker ammunition:

He accused the government of "playing around with . . . these adventurers from Texas and New York, trading away Canada's national resources at the expense
of the Canadian people." The deal, Diefenbaker said, would make Canada "a virtual economic forty-ninth state." (4)

And he won the next election on a national unity issue. And though he too flirted with the American industrialists, he was seen as a friend to small business and Canadian interests, which made him a foe of the corporate world, that launched campaigns against him.

Stage Three: The Tumour is Larger and Has Begun to Spread

Can the disappearance of an unimportant nation be worthy of serious grief? For some ... it can. Our country is the only political entity to which we have been trained to pay allegiance." George P. Grant*, Lament For a Nation

Grant referred to Lester Pearson's administration as 'capitalist internationalism", and felt that he was too cozy with JFK. In fact, a young journalist by the name of Pierre Elliot Trudeau, also criticized Pearson, and when he came to power himself sought to restore our sovereignty, and move the country toward a just society. This didn't mean that he necessarily turned his back on the corporate world, but did fight against American interests.

It was during his administration that the National Citizens Coalition was created on the advice of Ernest Manning, and the right-wing media launched an assault on Trudeau, calling him a socialist and sometimes even a communist. Leading the charge was the Toronto Sun, under Peter Worthington, and one of his journalists, Lubor Zinc, was the one who coined the term 'Trudeaumania', though it was meant to have a negative connotation. Another Sun journalist, David Somerville, would eventually head up the NCC.

They earned little credibility, until they were able to place a man, plucked right from the corporate world, to lead the country. Brian Mulroney. He would fling open the doors and announce to the anyone who would listen, that Canada was for sale. His free trade deal devastated the Canadian economy, but paved the way for a corporate takeover.

Stage Four: The Cancer has Spread to Every Corner of the Country.

"To lament is to cry out at the death or at the dying of something loved. This lament mourns the end of Canada as a sovereign state." George P. Grant*, Lament For a Nation.

Brian Mulroney may have put Canada on life support, but Stephen Harper is the one who will pull the plug. He has been systematically selling us off to American and multinational corporate interests. When he was proroguing he signed the most aggressive trade deal in the history of our country. And the recent potential sell off of Canada's potash is only the latest in what money expert Stephen Jarislowsky, of Jarislowsky Fraser Ltd., calls the "suicide of the country".

We are increasingly becoming a corporate state. Murray Dobbin focuses on the oil industry and the "dirty" oil that is giving Canada the reputation as a corrupt petro-state, but we have to look at all industries.

Corporations have their place in a society. They can keep small businesses afloat, as they provide services to the larger companies. They also provide good union jobs, which provides buying power and keeps service industries afloat. But these corporations, despite enjoying massive tax cuts and exemptions, have allowed greed to dictate. They now often compete with the small business, driving them out, while they outsource jobs overseas.

There needs to be a new and defined relationship that promotes fairness for the good of the country and our citizens.

All fascist regimes answered to their industrialists. They created autocratic governments to keep the people in line, and increased both military and police presence as a deterrent to public dissent.

We are on the brink of becoming that fascist state. And it is being done by embracing the philosophies of the father of neoconservatism, Leo Strauss: Deception, Religious fervour and unbridled patriotism.

Before the 2006 Canadian election, Paul Weyrich, the Godfather of the American Religious Right, told his people not to speak to Canadian journalists for fear that it might spook the Canadian public if they knew how connected Stephen Harper was to his movement. (5)

And Weyrich knew something about political strategy. He had worked on Ronald Reagan's campaign, using divisive politics to weaken the democratic process.

"With Reagan's outspoken opposition to the Civil Rights Act in 1964, Republican strategists knew that they would have to write off the black vote. But although 90 per cent of black voters cast their ballots for the democrats, only 30 percent of eligible black Americans voted. Republican ... strategist Paul Weyrich stated "I don't want everyone to vote ... our leverage in the election quite candidly goes up as the voting populace goes down. We have no moral responsibility to turn out our opposition." (6)

And Weyrich also knew that Canada was ripe for the picking, because we had a system with a fragile structure, that promised democracy based on the expectation of fair play.

So when I asked my question about restoring democracy, it was not only about replacing Stephen Harper, which I already know is an absolute necessity. But it was also about how we are going to keep our corporations in check, and give the power back to the people, where it belongs.

But more importantly, how we are going to close up the loopholes in our system that allowed one man to gain so much control. Michael Ignatieff has suggested that senators should be appointed by a committee made up of a cross-section of Canadians. That's a good start. The same should be done with judges and the Governor General.

Murray Dobbin suggests that we need determined civil disobedience, fully justified by the assault on our country. He's right. But we also need to restore faith in politics and encourage citizens to vote. And to do that we need to cut through the crap. Harper's strength in is keeping us divided and ignorant, because like his pal, Weyrich, he feels no moral responsibility to encourage Canadians to take part in the democratic process.

We are the only ones who can save Johnny, or Janie, or Omar or Hans or Pierre ... Canuck. And I happen to believe that we are worth saving.

*George Parkin Grant was a Canadian scholar. He had a sister Alison who married Canadian diplomat George Ignatieff. Alison and George had a son Michael, who is now leader of the Liberal Party. When Lament for a Nation was first published, the Grant/Ignatieff family was devastated. The senior Ignatieff had worked for both Diefenbaker and Pearson. But George Grant would later say it was reactionary to the defeat of Diefenbaker, but he did have some very valid concerns.

3. Lament For a Nation: The Defeat of Canadian Nationalism, By George Parkin Grant, McClelland & Stewart, 1965