Is Christian Paradis Travelling Through History With Bernhard Rust? 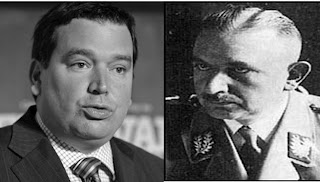 Two Germans were eyeing a burly lout in the Nazi uniform who was striding through a university hall. First man: "What is the policeman doing here?" Second man: "Sh, sh. That is the man selected to succeed Einstein."

That joke was published in a 1933 Time Magazine, as part of a story entitled 'Science: Jews Without Jobs':

Two German-Jewish winners of Nobel Prizes were without jobs last week. Both are full of years and distinction. Dr. James Franck, 51, was a professor at Gottingen University. He won his Prize in 1925, for experimental physics. Professor Fritz Haber, 64, was director of the Kaiser Wilhelm Institute for Physical & Electrical Chemistry in Berlin. He invented the important synthesis of atmospheric nitrogen and hydrogen into ammonia which supplied Germany with explosives and fertilizers during the War. Like Nobel Laureate Albert Einstein, Laureates Haber and Franck resigned their German jobs to avoid Adolf Hitler's white pogrom. (1)

Since coming to power 4 1/2 years ago, Stephen Harper has also been engaged in a "white" extermination of knowledge, especially scientific.

So while recent news has revealed that Canadian scientists have now had their muzzles tightened even further by Stephen Harper and his faithful officer, Christian Paradis; it should not be surprising to anyone.

However, it should be extremely alarming to everyone.

Now I know that Dimitri Soudas will immediately cry foul, suggesting that I'm comparing this latest attack on science to the extermination of six million Jews, but this was 1933, when Time assumed that the Holocaust would be benign, and limited to loss of rights.

But it was a period when the Nazis were trying to centralize power, or as Hitler's science/education minister Bernhard Rust remarked, "The whole function of education is to create Nazis."

Besides, Ezra Levant has accused the wonderful Margaret Atwood of collaborating with Al-Qaeda, so the bar has been set pretty low. And in the case of attacks on the scientific communities, then and now, the facts speak for themselves.

"Our national policies will not be revoked or modified, even for scientists." Adolf Hitler

Christian Paradis is not a scientist. His degree is in corporate law. And yet:

Natural Resources Canada scientists were told this spring they need “pre-approval” from Minister Christian Paradis’ office to speak with national and international journalists. Their “media lines” also need ministerial approval, say documents obtained by Postmedia News through access-to-information legislation. The documents say the “new” rules went into force in March and reveal how they apply to not only to contentious issues including the oilsands, but benign subjects such as floods that occurred 13,000 years ago.

They also give a glimpse of how Canadians are being cut off from scientists whose work is financed by taxpayers, critics say, and is often of significant public interest — be it about fish stocks, genetically modified crops or mercury pollution in the Athabasca River. “It’s Orwellian,” says Andrew Weaver, a climatologist at University of Victoria. The public, he says, has a right to know what federal scientists are discovering and learning. (2)

Bernhard Rust was not a scientist. His degrees were in linguistics and philosophy, and yet:

World great is Max Planck because he conceived the quantum theory, an exploit of pure science. Last week he listened with other German scientists in smoky Diisseldorf to Nazi Minister of Science, Art and Education Dr. Bernhard Rust, who felt called upon to deny that Hitlerism is hostile to Science.

"We are not! Nein!" cried Nazi Rust, "but we do not believe in Science divorced from the people. Nein! They are false scientists who believe that scientific life of a higher order can exist for itself alone while questions of the day are solved somewhere in the lower regions." (3)

So why does this matter? Lets hear the rest of the story of Nobel Prize winning physicist Max Planck:

That night Max Planck's scientific peers made him feel that he must make a bold reply to Bernhard Rust. Sad-faced Max Planck did not fail Pure Science. Next day at the Congress of the Kaiser Wilhelm Society for Advancement of Science he made what was considered a daring speech indeed. To have praised live Jew Albert Einstein would have been madness, but he did praise dead Jew Heinrich Hertz, discoverer of "Hertzian waves." And bold Max Planck said: "History proves that the greatest and most vital discoveries were made by scientists who worked for the sake of pure science only."

Indulgently Nazi Rust did not crack down on Professor Planck, but as president of the Society Herr Planck dolefully reported that 85 scientists have sent in their resignations and are suffering "economic difficulties" under the Nazi regime.

Same day in Munich, home of dark beer and darker Adolf Hitler. German artists were assured that Hitlerism is not opposed to art by Dr. Paul Joseph Goebbels, Minister of Propaganda & National Enlightenment. "Since National Socialism looks upon itself as the Art of Politics," crowed Cock Goebbels. "it feels a natural kinship with the other arts and artists." (3)

"We are not! Nein!" cried Stephen Harper.

In another interesting co-incidence:

Citing actions taken by the Conservative government since winning a minority government in 2006, 85 scientists across Canada have signed an open letter to all national party leaders calling on them to state how they will 'improve Canada’s track record' regarding the objectivity of science. This is the second such initiative within the week, the letter on 7 October being signed by 120 scientists.

"85 scientists across Canada" ... "Herr Planck dolefully reported that 85 scientists have sent in their resignations." Are we going to let it get that far?