The Conservative Law and Order Agenda is About Wrath, Vengeance and Punishing the Poor 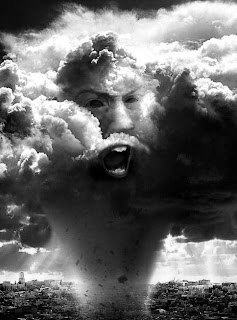 In a "Back to the Bible Hour" radio address, Preston Manning spoke of the "infallible Scriptures" and the "spiritual bankruptcy" of modern society.

This was evidenced, he said, in the increase of "juvenile delinquency, adult crime, drug addiction, drunkenness, adultery, divorce, prostitution, homosexuality and general moral laxity". And the only remedy for a sinful nation was prayer. (1)

Manning was not speaking from an Apocalyptic vision, but simply from a notion of "common sense". Canadians had lost their way. A secular society was creating rampant crime.

And despite the fact that Canada's justice system, while not perfect, was based on fairness; leaning toward rehabilitation as a way of creating a safer society, Manning was convinced that "sin" was on the rise.

You can't rehabilitate "sinners", you can only "save" them.

And that was the basis for the Reform Movement's law and order agenda.

We saw this recently with Stockwell Day. Presented with the facts that crime rates are down, and in fact are now the lowest they've ever been in Canada, he simply ignored it. The "sinners" are out there. If we build the prisons God will lead him to them.

We can only have a moral and just society when all threats are removed and locked away. And when the keepers of the morality are running the country, there will be no more "sin". The devil will have been vanquished.

This is why you cannot base a country's laws on the Old Testament, because a justice system can never be about wrath and vengeance. It's been tried and it doesn't work. Modern society learned long ago that you need to get to the root causes of crime and repair society's ills first. Beginning with poverty, unemployment and homelessness.

The Republicans, the Religious Right and Fox News have created the same kind of narrow minded thinking. But Chris Hedges has found that this new 'Republicanism', wrapped up in morality, where everyone is responsible for their own actions, is having the opposite effect.

Using Ohio as an example, he suggests that 'moral laxity' comes from despair, not a desire to sin. And this despair more often came from the loss of good paying jobs and the inability of families to make a decent living.

Laborers in the steel mills and manufacturing plants once made an average of $51,000 annually. Those who have moved into the service sector now make $16,000 in the leisure and hospitality sector, $33,000 in health care, or $39,000 in construction. In 2004 [under George Bush], average employee compensation in the United States fell for the first time in 14 years.' Between 2000 and 2004, Ohio lost a quarter of a million jobs and Cleveland became the nation's poorest big city, and young people are fleeing the state in massive numbers to find work.

The bleakness of life in Ohio exposes the myth peddled by the Christian Right about the American heartland: that here alone are family values and piety cherished, nurtured and protected. The so-called red states, which vote Republican and have large evangelical populations, have higher rates of murder, illegitimacy and teenage births than the so-called blue states, which vote Democrat and have kept the evangelicals at bay. The lowest divorce rates tend to be found in blue states as well as in the Northeast and upper Midwest. The state with the lowest divorce rate is Massachusetts, a state singled out by televangelists because of its Liberal politicians and legalization of same-sex marriage. In 2003, 'Massachusetts had a divorce rate of 5.7 divorces per 1,000 married people, compared with 10.8 in Kentucky, 11.1 in Mississippi and 12.7 in Arkansas.'

Couples in former manufacturing states such as Ohio have to have two jobs to survive. The economic catastrophe has been accompanied by the erosion in federal and state assistance programs, the cutting of funds to elementary and secondary education, the reduction in assistance to women through the Women, Infants and Children Supplemental Nutrition Program, along with reductions in programs such as Head Start and federal programs to assist low-income families, elderly people, and people with disabilities who once turned to the government for rental assistance.' Federal abandonment of the destitute came at a time when these communities most needed support. As the years passed and the future began to look as bleak as the present, this despair morphed into rage ... Domestic violence, alcoholism and drug abuse ran like plagues... (2)

Unemployment, underemployment, poverty and cuts to social programs created "sin", not Liberals or the secular. And the answer is not to lock them away.

But the Reform movement that pushes for stricter laws and more incarcerations, have been led to believe that any problems they might have, or that they see in society, are caused by lack of prayer. And they target the poor and unfortunate.

And that is who will suffer under these new Draconian crime bills. According to Dean Beeby, in his piece: Aboriginals, poor hit hardest by Tory sentencing law:

The preliminary statistics from Justice Canada lend support to critics who warn that Bill C-25, the so-called Truth in Sentencing Act, unfairly targets the poor, the illiterate and Canada's aboriginal community. (3)

And in true Conservative fashion:

The internal study was cited in a secret memorandum to cabinet about Bill C-25, but was not made public as the House of Commons and Senate debated
the proposed legislation. (3)

They were presented with the facts that contradicted their stance, so had to make sure that lawmakers never saw them. The Gun Registry all over again.

I'm not a socialists or a communist, but I think real "common sense" is targeting the causes of crime from an earthly perspective. And that requires believing that all humans have value, and creating a society that puts the needs of it's citizens above ideology.

But Stephen Harper, and indeed everyone involved in this movement on both sides of the border, pander only to the wealthy and self-righteous. In all of his photo-ops, when have you ever seen our prime minister engaging with the poor? His events are staged and by invitation only.

If he doesn't have to look despair in the face, then it doesn't exist.

In his book Waiting for the Wave, Tom Flanagan states that Preston Manning was not an ideologue. However, he does say that Stephen Harper was driven by ideology. But it's not an ideology based on religion, but based on the needs of the wealthy.

This means removing all barriers that prevent the rich from becoming richer and locking away anyone who might want to share in their wealth, not just those who might want to take it. He refuses to accept that if citizens are provided with good paying jobs, adequate health care, education and opportunity, we would all live in a safer society.

He once said of the proposal for enhanced social programs:

“These proposals included cries for billions of new money for social assistance in the name of “child poverty” and for more business subsidies in the name of “cultural identity”. In both cases I was sought out as a rare public figure to oppose such projects.” (4)

A rare public figure to oppose money going to child poverty. And yet he has no problem answering "cries for billions of new money for social assistance in the name of “corporate welfare”. Billions and billions of dollars, while asking the rest of us to tighten our belts and promising a new "austerity" budget. There is something fundamentally wrong with that.

We don't need more prisons or tougher laws. We don't need fighter jets. We don't need corporate tax cuts. What we need is a new government. And when we get it, we have to fight like hell to have these crime bills removed.

4. The Bulldog, National Citizens Coalition, February 1997
Posted by Emily Dee at 3:59 AM