The Harper Government and the Colour of Democracy

In September of 2005, Michael Ignatieff was invited to speak at the U. S. Coast Guard Academy, on leadership, and what that meant. He was originally going to talk about human rights and international politics, but this was in the wake of Katrina, so he changed his lecture to one of current relevance. 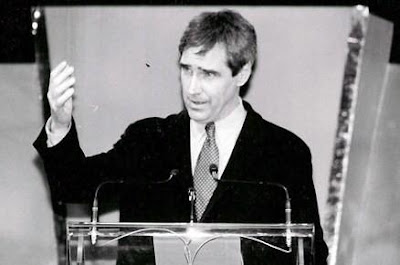 I wanted to share with you in a very raw form, a very direct form this civilian’s view of some of the challenges—some of the moral and ethical challenges that arise from the Katrina story, that is still unfolding. This is the largest natural disaster in US history, but it’s not just the loss of life and the scale of devastation that’s shaken the country. The most troubling aspect has been the failure of anticipation and the failure of response by almost all levels of government ... (1)

Using the levee as a metaphor, he suggests that the people in Katrina's path believed that it would protect them in the same way they expected their government to protect them, and just as the levee burst, so too did their faith in the government.

And to go off topic a bit, I think what happened in the U.S. in the wake of this disaster, epitomizes why neoconservative ideology will fail. There is far too much "assumption" and too little fact. But there is also a dismissive attitude toward those who are disadvantaged.

The evacuation plan for New Orleans ... assumed that people would leave by private car. Assumption number one. And assumption number two—that people, when they left, would be basically housed by their family and domestic networks. Both assumptions turned out to be flawed.

As images were shown from New Orleans and the surrounding area, and sent around the world, what we saw was a side of the United States that they tried very hard to keep hidden. These people were poor before the hurricane. And most of these devastatingly poor people were black.

A duty of care involves social knowledge—social knowledge about the facts of race and class, however unpleasant they may be in our society, and a willingness to create an evacuation plan that deals with a society that actually exists...

... Katrina was one of those moments where we saw the ties that bind the country together put under tremendous strain, the ties that bind were frayed by what happened in Katrina. One of the cries that went up from the people trapped in the convention center in New Orleans was very significant and I’ll never forget seeing the woman who said this: she said, “We are American citizens, we are American citizens, we are not refugees, we are not stateless objects of your charity, we are citizens of this republic, we have rights here and our rights have been denied.”

Ok, for that woman and for thousands of people who went through the experience of the last five or six days, the thing that was so shocking was that their citizenship counted so little.... But these ties of citizenship are legitimate and accepted as binding only if citizenship confers equal rights regardless of race and social class. (1)

"The thing that was so shocking was that their citizenship counted so little."

And sadly we are now living in a country where citizenship for many Canadians means very little indeed.

Sydney Sharpe, former member of the Ottawa Press Gallery, once wrote that: "This way of thinking characterizes the ideology and behaviour of right-wing Supremacist groups such as the Heritage Front. While such groups can, to a certain extent, be ignored because of their small numbers, such thinking is also evident in the doctrines of the Reform Party [those doctrines written by their policy chief Stephen Harper], who won a substantial number of votes in the federal election of 1993 and who hold 52 seats in Parliament." (2)

So should we really be surprised that the Reform Party, that changed it's name to Alliance Party and now call themselves the Conservative Party of Canada, have written a policy of selective citizenship?

We saw this with Suaad Hagi Mohamud, the Canadian woman who visited relatives in Kenya but was not allowed home until she took a DNA test.

If Canadian citizen Suaad Hagi Mohamud were wealthy or politically connected or media savvy, she would never have been stripped of her passport and her rights while travelling through Kenya.

She might have been stopped at the airport in Nairobi. Initially, a Canadian consular official might even have supported her detention. When she presented her identification, the Canadian system would have rallied to her side. Suaad Hagi Mohamud, however, is not rich. She's not a political insider. She's not a media darling. She is a black Somali immigrant who had to live on charity once Canadian authorities sent her passport to Kenyan police and suggested they prosecute her for not really being one of us. She had produced a half-dozen forms of valid identification, but our bureaucrats closed their ears to her desperate pleas for help. By cancelling her passport, they rendered her stateless. (3)

Her "citizenship counted so little."

And we are seeing it with Omar Khadr:

Lawrence Cannon stood up in the House of Commons and pronounced his guilt, before a court of law had determined that he was guilty of anything, and they refuse to bring him home.

"There's never been any allegation that Omar conspired to injure Canadians," said Nate Whitling, one of Mr. Khadr's Canadian lawyers .... it seems to me a terrible abuse of power that government ministers (or even little spokespersons) should be able to make insinuations about the criminal guilt of individual Canadian citizens, especially when no legitimate prosecutor has ever raised such charges and when Omar Khadr is still, under any legal process, however suspect, as the U.S. military commissions are universally considered to be entitled to the presumption of innocence. (4)

His "citizenship counted so little."

Or Brenda Martin, the Canadian woman languishing in a Mexican jail. Helena Guergis said that her government was doing everything possible to help her. Guergis even flew to Mexico herself, but never visited Martin or anyone involved. Instead she went partying and later said that she spoke to someone at the party about her.

Supporters of a Canadian woman imprisoned without trial in Mexico for nearly two years were astonished when they learned that a federal cabinet member is publicly claiming she and her government have worked hard behind the scenes to expedite Brenda Martin's case and to ensure her legal and human rights have been respected. Incredulity turned to anger when Helena Guergis, the secretary of state for foreign affairs and international trade, warned in a letter to the editor published in the Edmonton Journal that "those who are playing politics with Ms Martin's regrettable situation . . . are not helping to advance her case or get her home any faster."

... In her letter to the editor, Guergis, who is engaged to Edmonton MP Rahim Jaffer, said the federal government has "strongly and repeatedly pressed senior Mexican officials" to expedite Martin's case. But Dan McTeague, the Liberal foreign affairs critic for consular services, said he met with the Mexican ambassador to Canada, Emilio Goicoechea Luna, earlier this month and the ambassador told him no one from foreign affairs had ever contacted him about Martin's case. (5)

Martin wasn't black but was not wealthy. She didn't move in their circles.

Her "citizenship counted so little."

Or Jason Kenney removing gay rights from the citizenship guide.

Their "citizenship counted so little."

Or Stephen Harper removing the word "equality" from the Status for Women.

As for Canadian women, it is doubtful that Harper’s sudden interest in championing women in the developing world will wash. They have heard those words before. Shortly after taking power, Harper broke his pre-election promise to “take concrete and immediate measures…to ensure Canada upholds its commitments to women.” He removed the words “equality” out of the Status of Women’s mandate, closed 12 out of 16 SWC offices, abandoned a Universal childcare program and killed off the Courts Challenges Program. The program subsidized Constitutional
test cases for finally disadvantaged groups including women. A major beneficiary of the program was the Women’s Legal Education and Action Fund (LEAF) that intervened in over 150 constitutional equality cases including violence against women, sexual assault and pay equity issues. (6)

Our "citizenship counted so little."

Which brings us to Abousfian Abdelrazik.

The Harper government was warned shortly after it came to office in 2006 that Sudan’s notorious military intelligence agency was ready to “disappear” Abousfian Abdelrazik, a Canadian citizen, unless Ottawa allowed him to go home, The Globe and Mail has learned. Sudan wanted to “deal with this case for once and for all: we judge as significant their verbal reference to a ‘permanent solution,’” Ottawa was bluntly told by Canadian diplomats in the Sudanese capital, according to documents now in possession of The Globe.

Instead of protesting the threat or warning Sudan – a regime notorious for its human rights abuses – that Ottawa would hold it responsible if harm came to a Canadian citizen held in one of its prisons, diplomats in Khartoum were ordered by a senior Canadian intelligence official to deliver a non-committal response “notwithstanding the expected displeasure of the Sudanese.” (7)

And rather than deal with it, Lawrence Cannon simply lied to the Canadian people and to Mr. Abdelrazik.

The lobby of the Canadian embassy in one of the world’s leading basketcase nations is an odd place for our government to house a man posing a serious threat to national security, wouldn’t you say? And yet, this is what Foreign Affairs Minister Lawrence Cannon would have us believe he and his predecessor have been doing with Abousfian Abdelrazik for over a year. Yesterday, the latest chapter in the Sudanese-Canadian’s mind-boggling six-year struggle to return home unfolded as many had ruefully predicted. Having booked and paid for a flight to Canada, thus fulfilling the conditions under which the government had promised, in writing, to issue an emergency passport, the apparently destitute Abdelrazik was instead told he needed somehow to get himself removed from the United Nations’ no-fly list before the papers would be issued. (8)

So I am pleased to learn that Abousfian Abdelrazik has won the right to sue not only the Harper government, but Lawrence Cannon personally.

A Montreal man who claims he was abandoned by Canada and subjected to torture in Sudan has the green light to pursue his lawsuit against the federal government. The Federal Court this week rejected a government motion to strike significant parts of Abousfian Abdelrazik's suit for $27 million. The government argued it couldn't be sued by individuals for torture, that the government isn't duty-bound to protect Canadians detained abroad and that
Foreign Affairs Minister Lawrence Cannon couldn't be named personally in the
lawsuit.

In his statement of claim, Abdelrazik alleges the government arranged for him to be detained, encouraged or condoned his torture and actively obstructed his repatriation to Canada. In it, he singles out Cannon, seeking $3 million in damages for allegedly blocking his attempts to return. (9)

We need to let this government, and any future government, know that this kind of behaviour reflects badly on Canadians. It's not who we are and it's not who we want to be. Because despite the Reform Party mindset, our equal citizenship counts for everything!

5. Guergis warns against 'playing politics', By The Vancouver Province, December 26, 2007