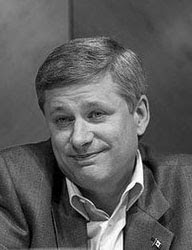 Throughout history there are a great many myths, and of course those myths then become facts and those facts become history. But for our time, one of the biggest myths is the labelling of Stephen Harper as a Tory, and his party as conservatives.

Can you imagine the wonderful Dalton Camp, former conservative strategist, ever working with someone like Stephen Harper? When he first learned that there was a movement to unite the Alliance Party (formerly Reform Party) with his conservatives, he was adamantly opposed, suggesting that the two parties had no common ground and that then leader of the Alliance Party, Stockwell Day, was "viewed by most Tories as embedded in the lunatic fringe." (1)

Lawrence Martin recently asked: Is there an old-style Tory in the House?

Is there a moderate Tory left in this land? There are many, of course. It’s just that they have no voice. They might as well be in cement shoes at the bottom of Lake Nipigon. This year, in particular, it has become evident just how much the old Tories of Robert Stanfield and Dalton Camp and Brian Mulroney and Joe Clark have been vanquished.

During their first years of governance, Stephen Harper’s Conservatives paid heed to the views of that progressive breed. But the party’s hard right now appears, with a few policy exceptions, to have assumed control of the agenda. And that agenda is about keeping out boat people, letting in Fox News, building new jails, reviewing affirmative action, killing the gun registry, playing down climate change, revamping the census and giving more voice to social conservatives.

However, I came across a decade old article published for the Fraser Institute, that lays it all out succinctly. Written by Laurence Putnam, it was entitled: An Analysis On The Differences Between the Progressive Conservative Party of Canada & The Canadian Reform Conservative Alliance.

I was a bit confused at first, because the Fraser Institute, with people like Jason Kenney, David Frum and Ezra Levant, worked very hard to unite these parties, and yet clearly this report detailed why such a union was wrong.

This analysis has been prepared in answer to pleas from various political personalities in Canada to unite the Progressive Conservative Party and the Canadian Reform Conservative Alliance. It is the goal of this paper to illustrate, with evidence of past elections, voter migration patterns, an examination of each party's culture and historical evidence to prove that any such unity between these two parties would alienate the moderate support base the Progressive Conservative Party enjoys and which must be captured to form a government.

It is the intention of this paper to successfully show how the Reform Party rose to prominence ... and how the Conservatives can work to ensure that movements such as the Canadian Alliance are not allowed to grow in the future.

What Putnam showed was that this would not be about "uniting the right", because the PC Party was not a right-wing party. I had mentioned this before, that in most ways there was little difference between the Liberals and PCs on policy, so elections were always about platform and personality. But the divide between the Reform/Alliance and the PC was a veritable chasm.

And they knew that.

So why did they do it, and why was it so successful?

I remember years ago reading an article in a May, 1939 issue of Liberty Magazine: Why Germany Will Not Go to War. In it the columnist laid out all the reasons why Adolf Hitler would not declare war in Europe. And what I found interesting was that everything predicted came true, and they lost as a result. And that's becasue what wasn't factored into the prediction was profiteering.

A lot of people stood to become very rich off that war, and they in fact did, including many American corporations. (George Bush's grandfather made his fortune financing the Nazis)

And this union of the right, as erroneously as it was labelled, was poised to make a lot of wealthy people wealthier. That's what neoconservatism is all about. And it's why they plucked Stephen Harper from the National Citizens Coalition, a group financed and run by multi-national corporations.

Stephen Harper himself has said that he got back into politics because he felt that the NCC no longer had any allies in government, with Brian Mulroney gone. And the NCC held his job open for four years, before naming another president. He was now working for them on the inside.

I'm going to break down Putnam's paper into several posts, because there are many startling revelations. I then intend to edit it down for a chapter in my E-Book, but for now the important thing is that Stephen Harper and his people deliberately perpetrated a fraud on the Canadian people, when they engineered a hostile takeover of the PC Party.

It puts so many past quotes and stories into perspective.

What was revealed to the Fraser Institute was that there were no grounds for a union. So instead they changed their strategy. And for that they went to Tom Flanagan, the Calgary School and founding member of both the Reform Party and Civitas Society, Ted Byfield.

Ted Byfield, the unabashed voice of the West since the Calgary School’s professors were pups, sees it another way – in terms Leo Strauss might have approved. “All these positions which Harper cherishes are there because of a group of people in Calgary – Flanagan most prominent among them,” Byfield says. “I don’t think he knows how to compromise. It’s not in his genes. The issue now is: how do we fool the world into thinking we’re moving to the left when we’re not?” (2)

I guess "you can fool some of the people some of the time", but who are they really fooling now? Harper's base has been reduced to those who know and relish the fact that he is not a Tory.

2. The Man Behind Stephen Harper, by Marci McDonald, From the October 2004 issue of The Walrus
Posted by Emily Dee at 4:37 AM