The Reform Movement Was Populism, Not Conservatism 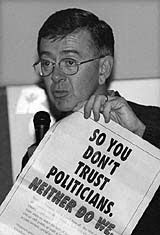 I wrote yesterday about a 2002 article published for the Fraser Institute, that laid out the reasons why the so-called "unite the right" movement was misleading. Written by Laurence Putnam, it was entitled: An Analysis On The Differences Between the Progressive Conservative Party of Canada & The Canadian Reform Conservative Alliance.

But despite the fact that the Reformers have always sold this to the Canadian public as a union of two right-wing parties, to avoid vote-splitting; it was no such thing. It was a new, corporate friendly, hard right populist fringe party, with money to burn; taking over a centrist party with a century and a half tradition.

And it was done with the sole intent of pushing an extreme right agenda, dressed up in comfortable familiarity. Think of it as the Big Bad Wolf pretending to be granny to lure in Little Red Riding Hood.

"My what a large number of lobbyists you have Stevie" ... "The better to hear you with"

"My what a large number of photo-ops you have Stevie" ... "The better for you to see me with.

"My what a lying two-faced person you are Stevie" ... "The better to fool you with"

Decades of Trying to Take Over the PCs

In the late 1960s, several wealthy businessmen approached Ernest Manning with the idea of creating a right-wing, free market party, but Manning suggested that instead of trying to launch something new, they would be better off trying to work through the current Conservative party. He and his son Preston wrote Political Realignment, which described two political rivals. One left, one right, with clear ideological differences. (1)

The Mannings attended the PC national convention in 1967, with the intent of selling their ideas, but they had overestimated their importance, and the party wanted nothing to do with them. Ernest then had his most popular party member, Robert Thompson, run on a PC ticket, to work on the inside to move the party right.

Thompson won the seat but had little luck doing anything more than that. So they put the idea on hold, waiting for the next wave.

When the resulting Reform Party had their first electoral success in 1993, it has always been thought that they did it at the expense of the PC Party, when Brian Mulroney's coalition self-destructed. But in his paper, Putnam largely refutes these claims. In fact, in the West, it was often at the expense of the NDP.

Prime Minister Kim Campbell's loss of Vancouver Centre, a traditional Tory seat (H.H. Stevens, Doug Jung, Pat Carney, Kim Campbell) to Liberal challenger Hedy Fry. The Liberal gains in the West during the 1993 election came chiefly at the expense of the PC Party, whereas most Reform party gains came chiefly at the expense of the NDP, as was witnessed in Lorne Nystrom's shocking loss in the Saskatchewan riding of Yorkton-Melville to Reform challenger Garry Breitkreuz .... British Columbians who supported the NDP in the 1980's and supported the Reform Party through the 1990's did not expediently shift their political views from the left to the right, but rather they were voting for the populist, anti-establishment party that best represented their views at the time.

In other words they did not go conservative, never believing that Reform was a conservative party.

Since the 2000 election, unity activists in both the PC and Canadian Alliance parties have preached that the PC party lost a major part of its family when the Reform Party rose to prominence, however, this is not exactly true. The PC Party did not experience a mutiny, but rather with the decline of the PC Party in Western Canada, an opportunity was extended for a new crew, the Reform movement, to come to power.

In fact, many members of the Reform Party elected in 1993 had never been Conservatives at all. Preston Manning had been a member of the federal Social Credit Party prior to incepting the Reform Party. MPs Diane Ablonczy, Deborah Grey and Val Meredith were never members of the PC Party. North Vancouver Reform MP Ted White came to the Reform Party after having left the Western Canada Concept* party, an unsuccessful Western separatist fringe party.

Western voters were looking for something entirely different. They always distrusted the East, so the Reform Party was seen as a vehicle for them and them alone. The PCs, Liberals and NDP, all represented Ottawa now, and the Reform battle cry hit home: "So you don't trust politicians, neither do we."

And former conservative voters did not go to Reform believing them to be another conservative party. They never would have voted for them if they thought that. They saw Reform as something completely new, but if it was with any feelings of tradition, they were with the Social Credit Party.

*Stockwell Day's father was also a member of this party.