REAL Women, Promise Keepers and the Promotion of Violence


It is a massive masculine shadow,
in a hall or crowded room,
lifting something indistinct up into the resonating night.
ROBERT BLY, "FIFTY MALES SITTING TOGETHER"

Robert Bly is an American author and poet who became the inspiration for the Mytho-poetic men's movement.

Fearing that the women's movement was turning men into "yogurt-eaters", Bly was determined to instead create a cabal of "wild men", who would seek traditional roles for the male species, many based on, believe it or not, Grimm's Fairy Tales.

The tales that portray the powerful king, the handsome prince, the beautiful maiden, and of course the witch determined to destroy them all. (He must have some mother issues)

No "round shouldered" men need apply.

Author Susan Faludi attended one of his few retreats that were open to women and asked why everyone was told in advance to bring a large stone. Bly's spokesperson explained that they were to build a monument to Hermes, but didn't want to go into too much detail, with women present.

An Olympic god. Of course. Patron of shepherds and cowherds. In fact, the spokesman, Walter Bliss, had legally changed his name to Shepherd Bliss, and his profession from army officer to psychologist.

Bly made his appearance to the sound of conga drums, and with the stance of a Viking, reminded those in the audience that he is Norse.


We no longer have images of "real men," Bly says, as the men continue the drum beat. Stereotypical sissies have replaced macho men. "Woody Allen is just as bad—a negative John Wayne," he says, raising his voice to a nasal squeak in imitation. "Men used to make models for what a man is from the Iliad and the Odyssey and places like that."

On the all-male weekend, he promises, he will bring back these role models for male edification: "One of the things we do is go back to the very old stories, five thousand years ago, where the view of a man, what a man is, is more healthy."(1)

A former peace activist, and strong opponent to the Vietnam war, Bly needed a new cause and found it in male bonding.


By the early '80s, he was, he confessed, starting to feel less than manly. "I began to feel diminished," Bly writes, "by my lack of embodiment of the fruitful male—or the moist male." It wasn't his loss of early prominence, however, that he identified as the problem. It was his "missing contact with men" and his overexposure to strong and angry women, including his own mother. (told 'ya)

He feared that he and men like him had allied them­selves too closely with such women, and consequently taken "a female view" of their fathers and their own masculinity. He de­cided he'd made a mistake with his earlier recommendation: "If someone says to me now, 'There is something missing on your feminine side,' I say, `No, what is missing is the masculine,' " Bly told Whole Earth magazine in 1988. He worried that he was only "superficially" manly. Men had awakened their feminine princi­ple only to be consumed by it. They had gone "soft." (1)

So he began running all-male workshops to reintroduce men to "the deep masculine."

This led to wilderness weekend retreats where men dressed in tribal masks and wild-animal costumes, beat drums and rediscov­ered "the beast within." His success inspired scores of imitators, creating a "cottage industry" for the men's movement.

Promise Keepers was brought to Canada by Conservative MP David Sweet. In 2004, when he ran, he posted on his website, the fact that he had been instrumental in creating the Northern chapter.

Women read that, reminded us of what PK stood for, and he lost the election.

In 2006, he got smarter, and removed all mention of the "wildmen" club, only saying that he ran a non-profit organization. He continues to represent Ancaster-Dundas-Flamborough- Westdale.


In short, the Great Mother's authority has become too great. "Men's societies are disappearing, partly under pressure from women with hurt feelings," he writes. Too many women are "raising boys with no man in the house." The single mother's son has become "a nice boy who now not only pleases his mother but also the young woman he is living with."

To restore the nice boy's male identity, Bly proposes, he must quit taking cues from mother and "go down into the psyche and accept what's dark down there." As a key guide to the journey, Bly offers "The Story of Iron John," borrowed from a Grimm's Brothers' fairy tale. In the story, a hairy "wild man" is locked up in an iron cage near the royal castle; the key to the cage is under the queen's pillow. One day the young prince loses his prized "golden ball" when it rolls into an abandoned pond, and he can only relieve it by stealing the key from mother and freeing the wild man. The young man, in the words of Bly's sidekick Keith Thompson, has to take back the power he has given to his mother and get away from the force field of her bed. He must direct his energies away from pleasing Mommy." (1)

At Bly's all-male weekends, the "wildmen" build lairs with plastic chairs, grunting and groaning, and whatever other male sounds they can muster.

Journalist Jon Tevlin, attended a weekend of frolic and fun, run by Bly, at a Bible camp in Mound, Minnesota. On the first night, Tevlin reports that Shepherd Bliss, dropped to his knees.


"Some of you may want to temporarily leave the world of the two-leggeds, and 'Join me in the world of the four-leggeds," he said. One by one, we slid from our orange Naugahyde chairs onto an orange shag carpet ripped straight out of the 1960s. "You may find yourself behaving like these four-leggeds; you may be scratching the earth, getting in contact with the dirt and the world around you."

As he spoke, people began pawing at the ground. . . . "You may find yourself behaving like the most masculine of all animals—the ram," Shepherd said in a coaxing voice. . . . "You may find unfamiliar noises emerging from your throats!" . . . There were gurgles and bleats, a few wolf calls. . .. Out of the corner of my eye, I saw Shepherd coming toward me, head down, tufts of white hair ringing a bald spot. . . . Meanwhile, I felt a slight presence at my rear, and turned to see a man beginning to sniff my buttocks. "Woof!" he said. (1)

How to Handle Your Women

As men are given instruction on how to find their "beast within", they are also told how to treat their women, and "wrest the power from their hands".

Inspiration came from objects they were asked to bring from home, including a .380-caliber automatic pistol. A rather odd trophy for a what was called a "battle on the domestic front".

And what if women are not so enthused with their new butt sniffing menfolk?

Promise Keeper's Tony Evans says “I am not suggesting that you ask for your role back, I am urging you to take it back. There can be no compromise here.” .

Robert Bly is not so subtle.

At one seminar, with more than a thousand men in attendance, a man in the audience told Bly, "Robert, when we tell women our desires, they tell us we're wrong." To which Bly responded: "So, then you bust them in the mouth." (1)

People are not taking this movement seriously enough. Stephen Harper is tearing down the Status for Women, and reversing gains made over the past decades.

But the media look at all the women in his caucus, and determine that he is not a misogynist.

If we had to select one photo that would define this period in our history, the following would definitely be in the running.

A frightened Diane Finlay making an announcement, with Pierre Poilievre in a Gestapo style stance, watching on. Women in Harper's party are mere window dressing. They have no power. 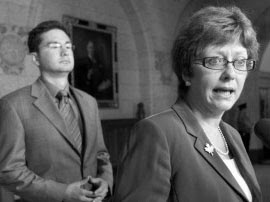 When Jason Kenney rewrote the citizenship guide, he all but excluded any contributions made by women.

Historian Margaret Conrad said of the new guide, that it “represents a new kind of Canada, one that is less sympathetic with my personal sense of a progressive, forward-looking nation, but the new slant is no doubt in keeping with the sentiments of the current administration in Ottawa ... It's kind of like a throwback to the 1950s, ... It's a tough, manly country with military and sports heroes that are all men."

We are being written out, reduced to the "witches" in Grimms Fairy Tales.