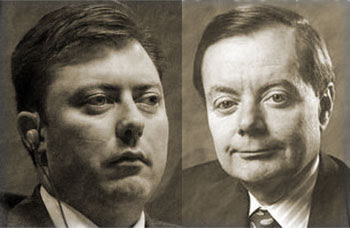 Another soldier in the war against American women, who helped to the launch a similar war against Canadian women, is Gary Bauer.

Bauer was with the Moral Majority/Religious Right political movement, that helped to run Ronald Reagan's campaign for President. As reward, he was appointed to the Education Department, as the "family policy" czar, and his first order of business was to "usurp the feminists" (1).

With that accomplished, the Department of Education, then directed the effort to crown the fathers. As Susan Faludi said, "If the "pro-family" movement was "pro" anything, it was paternal power". The same has been said of REAL Women of Canada. (2)

To many, the creation of a "family policy" office would suggest an office committed to helping families with things like financial aid, and medical or legal assistance, but that was not the case. Instead they churned out lectures on how the American family should "behave".

And in a further attack against the Civil Rights movement, Bauer told civil-rights leaders: "The values taught on the `Cosby' show would do more to help low-income and minority children than a bevy of new federal programs. . . . a lot of research indicates that values are much more important, say, than the level of welfare payments."

Not everyone could accomplish what the Huxtables accomplished, with a doctor father and lawyer mother, and that includes most white families. However, the Religious Right's attitude on racial issues has not changed since Reagan's time, as witnessed by their latest offspring, the FAMILY LEADER, and their suggestion that slavery was good for the black family.

However, women and blacks were not the only targets of Bauer's office"

[In 1986] President Reagan asked the surgeon general [C. Everett Koop] to prepare a report on AIDS as the United States confirmed its ten-thousandth case. Leaders of the evangelical movement did not want Koop to write the report, nor did senior White House staffers ..... Dr. Koop related to me, "Gary Bauer was my nemesis in Washington because he kept me from the president. He kept me from the cabinet and he set up a wall of enmity between me and most of the people that surrounded Reagan because he believed that anybody who had AIDS ought to die with it. That was God's punishment for them. (3)

Bauer's office promoted the nuclear family, as laid out in a fifty-two-page diatribe, that senator Daniel P. Moynihan, referred to as "less a policy statement than a tantrum."

"The Family: Preserving America's Future" opens with a quote from Teddy Roosevelt: "If the mother does not do her duty, there will either be no next generation, or a next generation that is worse than none at all." The pages were filled with attacks on "women who work, women who use day care, women who divorce", and "women who have babies out of wedlock".

His "recommendations" to save the family included a list of punishments for girls and mothers: "bar young single mothers from public housing; revive old divorce laws to make it harder for women to break the wedding bonds; deny contraceptives to young women". Mothers who stay home, he suggested, should get tax breaks; "the more babies, the more credits".

With such strong opinions you would think that Bauer and his wife Carole, were living this desired family life. But they weren't.

It comes then as a bit of a surprise to learn that Bauer has subjected his own children to this leftist institution—for nine years. (Bauer called daycares "Marxist")

He can explain it, he says. His use of day care was "different" and "better" because he placed his children in "home-based" day care—that is, an unlicensed center run out of a woman's living room. (It's unclear how this is better: a national review of child abuse statistics at day care centers finds that the most incidents of abuse have occurred at such unlicensed sites.) At any rate, Bauer says, a bit defensively, it's not like his kids went directly from the maternity ward to the day care nursery. His wife, Carol, waited "at least three, four months" before she returned to work. (1)

However, wife Carol remembers it differently:

"Actually, I went back to work six weeks after Elyse was born," says his wife ... At the time of her daughter Elyse's birth in 1977, Carol Bauer explains, she was a top assistant to Congresswoman Margaret Heckler; she couldn't just quit.

A lack of federal assistance programs for mothers also played a role in her decision: "There's no set leave policy on the Hill," she points out. Financial considerations entered into it, too: "We had bought a house and we had a mortgage." And then there was that other impulse that she just couldn't seem to squelch: "It wasn't just economics. I enjoyed the intellectual stimulation of the work. I loved work." She laughs. "I mean, when I had Elyse, I literally took my work with me. After I got out of the hospital, I was working the next day at home."

For years, at eight o'clock every morning, the Bauers dropped off Elyse, and eventually their second daughter, Sarah, at day care, put in a full day of work, and then picked up the girls on the way home, usually after six o'clock. The children spent so much time at day care, in fact, Carol Bauer says, that when it came time for Elyse to enter kindergarten, they enrolled her in the school in the center's neighborhood rather than their own. How did the girls feel about day care? "Oh, fine," Carol Bauer says. "They were very happy there. For them it was normal."(1)

Like Beverly Lehaye, one of the founders of REAL Women's inspiration: 'Concerned Women for America', Carol Bauer only felt fulfilled when she was working outside the home. When she finally did drop out of the workforce, Bauer found "nesting" difficult, and was only happy when she spent most waking hours doing volunteer work.

He was alleged to have had an affair with a 26-year-old staffer (deputy campaign manager Melissa McClard), prompting nine members of his staff to quit. He denied that it was an affair, but Charles Jarvis, Bauer's campaign manager, warned Bauer several times "in the clearest possible terms" that he was creating "the appearance of impropriety" by spending "hours and hours and hours behind closed doors with a young single woman."

Canada's "family values" man, Vic Toews, lost his deniability rights, when it was revealed that he had fathered a child with a young conservative staffer, breaking up his 30 years plus marriage.

From Women's Affairs to Foreign Affairs

"For Harper, the courtship of the Christian right is unlikely to prove an electoral one-night stand. Three years ago, in a speech to the annual Conservative think-fest, Civitas, he outlined plans for a broad new party coalition that would ensure a lasting hold on power. The only route, he argued, was to focus not on the tired wish list of economic conservatives or “neo-cons,” as they’d become known, but on what he called “theo-cons”—those social conservatives who care passionately about hot-button issues that turn on family, crime, and defence.

"Even foreign policy had become a theo-con issue, he pointed out, driven by moral and religious convictions. “The truth of the matter is that the real agenda and the defining issues have shifted from economic issues to social values,” he said, “so conservatives must do the same.

"Arguing that the party had to come up with tough, principled stands on everything from parents’ right to spank their children to putting “hard power” behind the country’s foreign-policy commitments ... " (4)

Bauer is associated with Focus on the Family, a group that conservative MPs, Rob Anders and Maurice Vellacott belong to, and who helped Stephen Harper get elected in 2006, on his "anti-same-sex marriage" platform.

But the most alarming activities for Bauer, and indeed most of the Religious Right, is their dramatic shift to foreign policy.

Bauer is a member of the Project for the New American Century, that included neoconservatives like Steve Forbes, Dick Cheney, Richard Perle and William Kristol. This group helped to draft the Bush Doctrine.

They have been critical of Obama's decision not to send ground troops to Libya, instead following the UN Resolution, which does not support a "regime change".

The Harper Doctrine has no such limitations, and in fact is very specific that only a regime change will do.

However, even more alarming is Bauer's new pet project: Emergency Committee for Israel's Leadership, an aggressive extension of Christians United for Israel, who support extended military engagement in the Middle East.

This group, like most in the movement, are Apocalyptic.

So what does it mean when they not only provide foot soldiers for Harper's war on women, but dictate his foreign policy? Or what Harper himself calls 'putting “hard power” behind the country’s foreign-policy commitments'.

Yet another reason why the media has to start paying attention.

Drop the 'Tory' nonsense, and report from the Neoconservative/Religious Right/Tea Party reality.

4. Stephen Harper and the Theo-cons: The rising clout of Canada's religious right, By Marci McDonald, The Walrus, October 2006
Posted by Emily Dee at 5:28 AM