From Forlorn to Forbearing: Feminism Never Stood a Chance 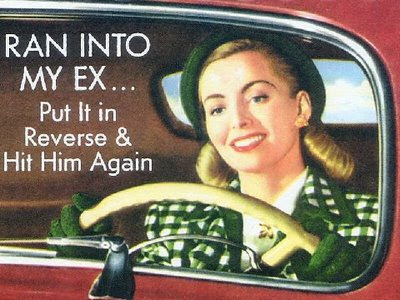 We all remember the scene in When Harry Met Sally, when Meg Ryan shows Billy Crystal how easy it is for a woman to fake an orgasm, and another patron declares "I'll have what she's having".

It was probably the funniest scene in the movie, but not everyone was laughing.

Two years before the movie's release, in November of 1987, Shere Hite published the last installment of her national survey on sexuality and relationships, Women and Love: A Cultural Revolution in Progress, and the reaction from the male population was immediate.

The media, unable to dispute the findings, since they were testimonials from flesh and blood women, instead attacked Hite personally, as a man hating flake.

I doubt many read all 922 pages, representing the views of 4,500 women, so instead thumbed through the summaries, questioning the numbers.

They also accused Hite of only distributing her questionnaires through women's rights groups, but that was not the case. Hite sent her surveys through a wide range of women's groups, including church societies, social clubs, and senior citizens' centers. And while their views were dismissed as "man-bashing diatribes", they sounded more forlorn than vengeful.

So why the uproar?

Says Susan Faludi, in her book Backlash: The Undeclared War Against American Women: "the overheated denunciations of Hite's book suggest an emotion closer to fear than fury."

A ridiculous assumption, but one shared by many just the same. Canadian neoconservative Link Byfield, spoke at a REAL Women of Canada conference, relating his fears"

To populate the nation, society has implemented the ideas set out in Aldous Huxley's book, "Brave New World." For example, we are increasingly playing with providing babies in nurseries without mothers and fathers and families, just as predicted by Mr. Huxley ...

Fortunately, most men don't really feel that way, enjoying more intimacy in an equal partnership, but it helps to reveal some of the fears, neocon males have of "radical feminists".

If women can support themselves, pleasure themselves, have and raise children themselves, where do they fit in? Will they have to audition for a place in society that they were once guaranteed, simply because of their maleness?

The Strange Case of Srully Blotnick

Eventually Shere Hite was forced to leave the United States and become a German citizen, she was so vilified.

And yet another expert on women, who was releasing the results of his survey, was glorified by the media. Srully Blotnick, a columnist for Forbes Magazine.

Blotnick asserted that his twenty-five-year study of 3,466 women proved that achieving career women are likely to end up without love, and their spinsterly misery would eventually undermine their careers as well. "In fact," he wrote, "we found that the anxiety, which steadily grows, is the single greatest underlying cause of firing for women in the age range of thirty-five to fifty-five." He took some swipes at the women's movement, too, which he called a "smoke screen behind which most of those who were afraid of being labeled egomaniacally grasping and ambitious hid."

Dr. Blotnick appeared everywhere and was quoted often. And his testimonials were not deemed to be female-bashing diatribes, but legitimate views of working women.

And Forbes magazine paid him hundreds of thousands of dollars to produce still more studies about these "anxiety-ridden careerists". But there was a problem.

First off, if Blotnick had really been compiling his data for 25 years, using interviews with women, as he claimed; it would have meant that he had began when he was only 17. How many women are going to open up to a 17-year-old boy, about their anxieties over working outside the home, while still being expected to perform 80% of the domestic duties.

Or about their sexuality?

The biggest problem, however, was that Dr. Blotnick was not a doctor at all. His degree had been acquired through a correspondence course, and was not recognized anywhere. When the news broke, Forbes had him remove the "Dr." from his byline, but continued to print his columns.

And the media continued to quote him everywhere.

Eventually Forbes magazine did fire Blotnick, after a criminal investigation for practicing psychology in New York, without a license.

But why was a business rag so concerned with women's rights, that they poured so much money into this man's "research"? Keeping him on even after learning that he had lied about his credentials?

To understand the motivation of Forbes magazine is to understand it's editor-in-chief, Steve Forbes, a card carrying member of the Neoconservative movement.

Grandson of the magazine's founder, Forbes used the publication to endorse Ronald Reagan, and when Reagan became president, he brought Forbes into his administration as head of the Board of International Broadcasting.

Steve Forbes took a run at the presidency on his own, but failed. However, he continued to work behind the scenes, in many think tanks and AstroTurf groups, the most famous being the American Enterprise Institute for Public Policy

Alykhan Velshi, Jason Kenney's former puppet master, was plucked from there to help put words into Kenney's mouth, and keep the boys in the backroom "election ready". However, now that Harper has a majority, Velshi has left, his work here apparently done.

AEI also helped to draft the "Clash of Civilizations" foreign policy, which according to Lawrence Martin in his book Harperland, is something that Stephen Harper has embraced.

The American Right has been the driving force behind Canada's movement for decades.

He brought on board some Republican heavyweights, including strategist Mike Murphy, who drafted a "common sense" revolution, with the promise of a 30 percent cut in New Jersey's income tax. As a result she beat out the incumbent Governor James Florio.

So successful was the campaign that the Neocons decided to replicate it, transforming plain old Mike Harris into "a *Christian Coalition Republican".

Whitman defeated a popular Democratic incumbent, Jim Florio, primarily on the basis of a Murphy-inspired campaign using a "common sense" slogan and pledging a 30 per cent tax cut. Since her victory, the activities of her government in implementing this plan had been carefully charted by Harris aide Bill King. In March 1994, Harris actually travelled to New Jersey to meet Whitman and discuss strategy. Two months later, the "Common Sense Revolution" with its 30 per cent tax cut was unveiled. (Hard Right Turn: The New Face of Neo-Conservatism in Canada, Brooke Jeffrey, Harper-Collins, 1999, ISBN: 0-00 255762-2 4, Pg. 166)

And the American neoconservative movement has expanded it's mandate, making Canada Chapter Twenty-two of The Shock Doctrine.

They didn't need a bloody coup to achieve their goals, only a willing partner, and no one was more willing than Stephen Harper.

When is our media going to wake up? The evidence is so overwhelming, that it is hitting them between the eyes, knocking them on the head and kicking them in the groin. Yet they still choose to ignore it, preferring instead to believe that Harper was sprinkled with happy powder and instantly turned into a "Tory".

A miracle only rivalled by those witnessed at Sainte-Anne-de-Beaupré.

Whether the challenges program is gone for good is, of course, still in doubt. It survived its last demise under Mulroney, [Lorne] Gunter recalls, by kicking up such a squawk that even the Tories themselves promised to revive it if returned to office. But the Conservatives of those days were the so-called "Red Tories," a species to which Harper & Co. do not belong.

Moreover, the conservative lobby groups are now considerably better organized. The SOW had barely got started in its mass-mailing campaign against the Harper axe when Gwen Landolt of the conservative REAL Women organization, pounced on them for using government funds to influence government policy. Her swift response was typical. It has been REAL Women, totally self-financed by thousands of members, which more than any other group finally put the boots to these detestable agencies. May they stay dead.

There is no argument that we've "had the boots put to us", but the question is: When are we going to start kicking back?

*Later brought to Canada by Jason Kenney and company. Kenney would also use his Canadian Taxpayers Federation to endorse Mike Harris.
Posted by Emily Dee at 4:12 AM