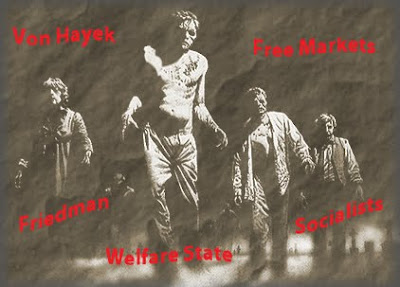 In November of 2009, the Canadian Press learned that a government program designed to recruit the best and brightest from Canada's universities, had been politicized for partisan interests.

Before being granted an interview, those seeking to enter the Accelerated Economist Training Program, had to first write an essay on the Conservative ad campaign, labelled the Economic Action Plan.

"It smells a little bit," said Leslie Pal, professor of public policy at Ottawa's Carleton University. "It places an unfortunate implication of inviting people to write glowing things about the economic recovery plan."

Pal said he sees no rationale for asking people looking for a job with the government to comment on current government policy, especially when that policy is so contentious. "I think this is not a good idea."

A further indoctrination of Canada's youth into the neoconservative cult.

In his book Not a Conspiracy Theory: How Business Propaganda Hijacks Democracy, Donald Gutstein writes of a program that the Fraser Institute runs to catch them when they're young.

The Fraser Institute launched a program in 1988 that would have far-reaching impact on advancing the corporate agenda. This program, aimed at students, is actually a half-dozen initiatives through which the institute "is cultivating a network of thousands of young people who are informed and passionate about free-market ideas and who are actively engaging in the country's policy debate"

Some of those involved in the program include Jason Kenney, Ezra Levant, Danielle Smith (possibly the next premier of Alberta), Rob Anders and a young man named Matthew Johnston.

Johnston came to the public's attention for his part in a radio hoax, on behalf of his boss Rahim Jaffer.

Due to a scheduling conflict, Jaffir had Johnston take his part in a radio interview. Jason Kenney and Ezra Levant paid the man off, suggesting that "$40,000 buys a lot of silence".

But Matthew Johnston was also behind the formation of a right-wing organization: Canadian Property Rights Research Institute. Other members included Danielle Smith, a former student of Calgary School's Tom Flanagan, and Rob Anders, both members of the Fraser's youth program.

Rahim Jaffer had taken CanPRRI's case to Parliament when Revenue Canada refused to grant them non-profit, tax-exempt status. It folded soon after.

However, a look at one of their publications, shows more than a connection to the Fraser and the Harper government. They are linked to a network of think tanks and advocacy groups, many created under the guidance of Milton Friedman, Friedrich Von Hayek and other Chicago school alumni.

With a Harper majority and accelerated attempts to put his stamp on every aspect of government, will only neoconservative youth be allowed access into the halls of political power?

Will there be more tests?

When Carolyn Bennett was in Kingston recently to discuss our crumbling democracy, she spoke of the different criteria for those entering political life.

At one time, they got into politics to make a difference, often in their chosen field. As a doctor she was concerned with health issues.

But now she says that many Conservative candidates are only interested in party politics. They have no interest whatsoever in the betterment of the country, only in furthering an agenda. This includes their staff.

Bob Rae refers to them as "25-year-old jihadis", who often make the decisions for the elected MPs.

I shudder to think what kind of country we will become as a result.
Posted by Emily Dee at 2:30 PM