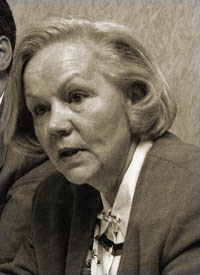 "There is not much point in being minister for the status of women, when women have no status in this country!" Judy Erola

Erola was a cabinet minister in the government of Pierre Trudeau. Feisty and independent, she directed her argument toward the prime minister himself, when the "notwithstanding clause" threatened section 28 of the constitution, guaranteeing equality of the sexes. (1)

Can you imagine anyone in Stephen Harper's cabinet challenging him in such a manner?

But then Erola was no ordinary woman. Canada's first weather girl, breaking the barrier in 1953, and one of the first female network executives, she spent a lifetime fighting for women's rights. She is currently on the board of Equal Voice, an organization which seeks to assist Canadian women in running for political office.

But in 1983, she made waves when she proposed that the tax exemption for dependent spouses, be terminated.

Fashioned after the American Religious Right group: 'Concerned Women for America', REAL, which stands for 'Realistic, Equal, Active, for Life', drew in women mainly from the pro-life movement.

It's misleading to call this a woman's movement, because it is clearly a movement that glorifies the male species in our society.

1. To reaffirm that the family is society’s most important unit, since the nurturing of its members is best accomplished in the family setting.

2. To promote the equality, advancement and well being of women, recognizing them as interdependent members of society, whether in the family, workplace or community.

3. To promote, secure and defend legislation which upholds what it considers the Judeo-Christian understanding of marriage and family life.

4. To support government and social policies that make homemaking possible for women who, out of necessity, would otherwise have to take employment outside the home.

5. To support the right to life of all innocent individuals from conception to natural death.

They claim to be non-partisan, but in fact helped to establish policy for the Reform Party, and constantly criticize the NDP and Liberal parties, on their website and in their publications.

Since Stephen Harper's Reform-Conservatives gained power in 2006, the influence of REAL Women of Canada can be seen in many of their policies, including increased tax relief for single-income families.

And remember that one of Harper's first actions after being elected was to remove the word "equality" from the charter of the NAC.

REAL women claim to represent a silent majority of women within Canada. They promote male headed, single breadwinner families, and believe that women should be homemakers, mothers and wives, in direct contrast to the National Action Committee on the Status of Women and its umbrella organizations.


A key goal of the organization is to denounce the equal rights clause in the Canadian Charter of Rights and Freedoms, in addition to protesting feminist movements and organizations. They argue that government spending and funding of these feminist organizations was undermining traditional gender and family relations (2)

Other concerns are abortion, universal childcare, and the improvement of the economic situation of women, who may be encouraged to enter or remain in the workforce, while raising children.

Other things they oppose include anti family violence programs, which they claim encourage hatred toward men; no-fault divorce; and protection for gay and lesbian people. (2) As with most conservative groups, they want to return to the nostalgic 1950s when the nuclear family was the only accepted configuration.

I've been organizing my research and plan to compile it all into a series of essays, that I will upload on Scribed.

I'm choosing this government's complete change in direction on woman's issues first, because it's important to understand that with a majority, REAL Women of Canada, will play an important role in determining what funding will be scrapped and what new programs will be implemented.

There have already been many, but we can expect many more, especially when it comes to reproductive rights.

This group may be headed by women, but those women are being directed by men, and my aim is to expose as many as possible.

I also intend to show that REAL Women of Canada is just another cog in the wheel of the American Moral Majority/Religious Right, and the new right-wing movement that is destroying social democracies everywhere.

The Harper government couldn't ignore them even if they wanted to.

When you buy in, you have to accept the entire package, and they have done that to the letter. Every action, every word, comes from the Republican/Tea Party/Moral Majority.

And that includes rolling back many of the gains made by women over the past half century.


"I myself have never been able to find out precisely what feminism is. I only know that people call me a feminist whenever I express sentiments that differentiate me from a doormat." Rebecca West 1913

I'm blogging the essay in chunks before putting it together for Scribed, and will then post a link.

From Forlorn to Forbearing: Feminism Never Stood a Chance

Harper's War on Women Was Launched in the USA

REAL Women, Promise Keepers and the Promotion of Violence

Right-Wing Women and Their "Christian Values"