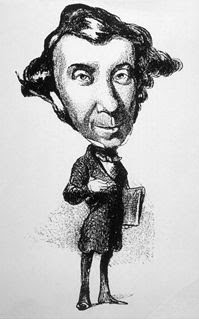 Neoconservative doctrine was written by academics and based on the writings of scholars, from Plato to Aristotle, Locke to Rousseau, and everything in between.

But one of the scholars often quoted, is Alexis de Tocqueville, a nineteenth century political thinker, who like many shaping the minds of young neocons, was born into wealth as a member of the aristocracy.

And he wrote of poverty as a man who had never known it, only observed it, yet his 1835 Essay on Pauperism, is used to justify the right's reluctance to help the poor.

What Tocqueville saw as a basic problem, was the definition of poverty.

"Among civilized peoples, the lack of a multitude of things causes poverty... In a country where the majority is ill-clothed, ill-housed, ill-fed, who thinks of giving clean clothes, healthy food, comfortable quarters to the poor? The majority of the English, having all these things, regard their absence as a frightful misfortune; society believes itself bound to come to the aid of those who lack them.... In England, the average standard of living a man can hope for in the course of his life is higher than in any other country of the world. This greatly facilitates the extension of pauperism in that kingdom."

So poverty is a state of mind? A comparative?

If our poor people are better off than the poor in central Africa, are they really poor?

Imagine going to your boss and asking for a raise and she tells you that you are already overpaid when compared to workers in Third World countries.

But workers in Third World countries aren't spending $1.30 a litre for gas to get to work, or 8 bucks for a box of cereal.

The definition of poverty has to be relative to how the rest of the population lives.

However, I do believe that in a country with such vast natural resources as Canada, that everyone should be clothed, fed and housed. And everyone should have equal access to healthcare and education.

David Frum is right when he says that government should never protect us "against the miseries caused by idleness", but is wrong when he says that only the indigent, or most destitute in society should be given handouts.

Neocons believe in the power and responsibility of the individual. Striving for equality will only bring those better off down to the level of those with very little. And they use that philosophy to justify pandering to the rich and ignoring the poor. A plantation mentality where the rich, (whose wealth is proof that they are smarter and more deserving than most), will in turn, take care of the poor.

But it's that rot that determines Stephen Harper's actions.

“These proposals included cries for billions of new money for social assistance in the name of “child poverty” and for more business subsidies in the name of “cultural identity”. In both cases I was sought out as a rare public figure to oppose such projects.”(Stephen Harper, The Bulldog, National Citizens Coalition, February 1997)

I'm very concerned with the approaching perfect storm in Ontario. A Harper majority (with a cabinet of many ex Mike Harris disciples), Harris protege Tim Hudak, (whose wife Deb Hutton was Harris's gatekeeper), as premier of the province and Rob Ford as mayor of Toronto.

Like most neoconservative governments, Mike Harris's created the highest number of homeless people in the history of our province. And what was worse, he didn't care. One of his henchmen, Jim Flaherty, simply suggested that we throw them all in jail.

And if a person froze to death living in their car, at least they had a car.

Ford is already talking about selling off public housing in Toronto. Maybe he hopes to drive the poor out of his city, but will only drive them into the streets. 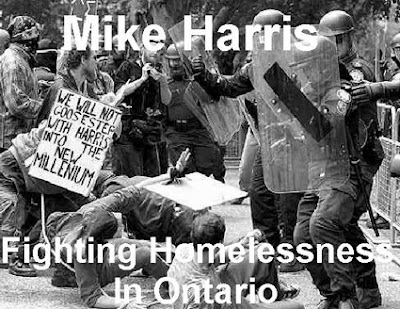 Hudak wants to eliminate or drastically reduce the public service, suggesting that because they make a good wage, small businesses can't compete with government in the labour market. What the fool doesn't realize is that those good wages keep many small businesses afloat.

When Mike Harris ran Ontario, we had a Liberal government federally. When Brian Mulroney was prime minister, we had Liberal and NDP governments in Ontario.

If Hudak takes Ontario, there will be no counterweight.

It's absolutely terrifying.
Posted by Emily Dee at 4:11 AM