The Canadian Manifesto: How the American Neocons Stole my Country 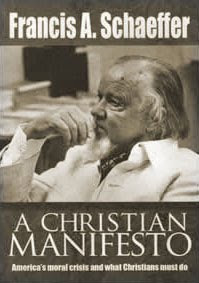 Maurice Vellacott's administrative assistant, Timothy Bloedow, once accused me of hating Christians. This was in response to my criticism of his critique of Dr. John Stackhouse's review of Marci McDonald's book: The Armageddon Factor.

Though Prof. Stackhouse was critical of McDonald for focusing too much on the Apocalyptic nature of some religious groups, he agreed with her concern for reconstructionism. "There are Christians about whom even other Christians should be wary, especially those who talk about things like theocracy and Christian government."

Bloedow runs a website called christiangovernance.ca, promoting just those things that we should be wary of.

In his new book Faith in the Halls of Power, D. Michael Lindsay reveals that the Moral Majority/Christian Right, was inspired by Francis Schaeffer, who ran a commune in Switzerland, promoting a second American revolution. This time they would not be taking on the British, but the Humanists, reclaiming the United States for Christianity.

Their brand of Christianity, where the Bible is not just the Truth, but the only Truth. Schaeffer writes that 'If we accept part of the Bible as a myth, we might as well be consequent and accept the whole Bible as a myth. Why, I can have more respect for a Teddy boy who tells me that killing a friend with a bicycle chain is all right. He at least has a philosophy.'

There is no compromise.

Schaeffer's commune became the launching pad for the Moral Majority/Christian Right. He encouraged his followers to become active, starting the anti-abortion movement, as a test for the power of pugnaciousness. Presidential hopeful (I hope not), Michelle Bachmann, claims that Schaeffer influenced her own views on abortion.

Lindsay tells us that while many Evangelical leaders initially agreed with the necessity for such a movement, others soon lost the taste:


Even though the Moral Majority succeeded in galvanizing evangelicals in the 1980s, as early as 1985, leaders within the group were growing uneasy about the alliance between religion and politics. Moral Majority vice president Cal Thomas resigned from the organization to pursue a career as a columnist. When I interviewed Thomas, he told me that evangelical political action at the time was — and according to him still is — "operating in the flesh and attaching God's name to it.... It's doomed to futility."

In 1996, Thomas and evangelical pastor Ed Dobson (no relation to Focus on the Family's James Dobson) wrote Blinded by Might, in which they asked, "How can [evangelicals] impose a morality on people that you can't impose on yourself?" Citing rampant materialism, sexual promiscuity, and evangelical hubris, Thomas and Dobson renounced their involvement with the Religious Right. (Lindsay p.56)

But the worst of them kept going, amassing fortunes, feeding off people's fears and prejudices.

Surprisingly, however, the most scathing denunciation came from Schaeffer's own son, Francis Jr.

In his book Crazy for God, he suggests that the movement is one of rampant racism, ignorance, perversion and greed.

Most of us would agree, but as expected, the right-wing noise machine sprung into action, launching attacks on their guru's son.

Everyone Has a Manifesto

A written statement declaring their intentions, motives, and views. So he wrote one, which became the guide for the Moral Majority/Religious Right.

After researching this movement for several years now, I've determined that somewhere there is a Canadian Manifesto. There has to be.

The connections between the Conservative-Reform-Alliance Party and the American Neoconservative/Religious Right movement, are too profound to be random.

So I've decided to make that the title of this particular body of research, as I organize my writings and thoughts. (Is that possible?)

The Canadian Manifesto will lay bare the war on women, gays and ethnics, and the attempts to turn Canada into a theocracy. It will also reveal how the real power in Canada has been sent South. The final chapter of Naomi Klein's Shock Doctrine.

Not a conspiracy theory, but in the words of Joe Friday, "just the facts". However, I will not change the names to protect anyone, since none are innocent.