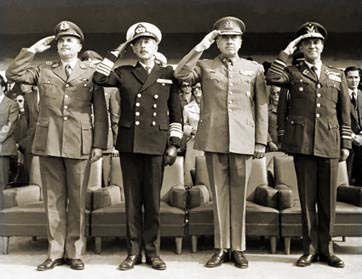 The Southern Cone refers traditionally to the Latin American countries of Argentina, Chile, Paraguay, and Uruguay, and often includes Brazil.

In the 1970's, the area was the hotbed of left-wing ideals, with Salvadore Allende becoming the first democratically elected Marxist, when he became President of Chile.

But not everyone saw Allende's victory as positive.

Allende was hated by the Chilean monied classes for understandable reasons: he expropriated their large estates for peasant co-operatives and supported policies of large wage increases in industry. When he nationalized all U.S.-owned copper companies whose mines had been developed with U.S. capital and technology in the early years of the century and were still lucrative, he made an implacable enemy of the United States and its president, Richard Nixon. Henry Kissinger, then U.S. secretary of state, openly stated American intentions after Allende's election in 1970 when he said, "I don't see why we need to stand by and watch a country go Communist due to the irresponsibility of its people. " (1)

Fortunately for the monied classes, Chile already had a complement of free marketeers, who had been studying under the Chicago School of Economics. In the climate of the Cold War, a school was established in Santiago, to indoctrinate young students in the principles of neoliberalism.

Figuring out how to achieve that goal was the topic of discussion between two American men as they met in Santiago, Chile, in 1953. One was Albion Patterson, director of the U.S. International Cooperation Administration in Chile—the agency that would later become USAID—and the other was Theodore W. Schultz, chairman of the Department of Economics at the University of Chicago. Patterson had become increasingly concerned about the maddening influence of Raul Prebisch and Latin America's other "pink" economists. "What we need to do is change the formation of the men, to influence the education, which is very bad," he had stressed to a colleague. This objective coincided with Schultz's own belief that the U.S. government wasn't doing enough to fight the intellectual war with Marxism. "The United States must take stock of its economic programs abroad ... we want [the poor countries] to work out their economic salvation by relating themselves to us and by using our way of achieving their economic development ... (2)

The economic policy of developmentalism, then rampant in South America, was viewed as "pinko", and just a step away from Communism.

The two men came up with a plan that would eventually turn Santiago, a hotbed of state-centred economics, into its opposite—a laboratory for cutting-edge free-market experiments, giving Milton Friedman what he had longed for: a country in which to test his cherished theories. The original plan was simple: the U.S. government would pay to send Chilean students to study economics at what pretty much everyone recognized was the most rabidly anti-"pink" school in the world—the University of Chicago. Schultz and his colleagues at the university would also be paid to travel to Santiago to conduct research into the Chilean economy and to train students and professors in Chicago School fundamentals.

What set the plan apart from other U.S. training programs that sponsored Latin American students, of which there were many, was its unabashedly ideological character. By selecting Chicago to train Chileans—a school where the professors agitated for the near-complete dismantling of government with single-minded focus—the U.S. State Department was firing a shot across the bow

But despite the fact that they were churning out hand picked neoliberals, the Southern Cone was still progressive.

But the Allende victory, gave Friedman, and what were referred to as the "Chicago Boys", an opportunity to create a laboratory, to test aggressive free market principles.

And to achieve this, it was necessary to engage in what Augustus Pinochet, the planted dictator of Chile, would call "Authoritarian Democracy". And Milton Friedman, the man who once accused President Kennedy of trying to create a police state, when he announced that he would be regulating the price of steel (Time. April 22, 1962), would oversee the project from start to finish.

And not just in Chile:

... the next fix came from other countries in Latin America's Southern Cone, where the Chicago School counter-revolution quickly spread. Brazil was already under the control of a U.S.supported junta, and several of Friedman's Brazilian students held key positions. Friedman travelled to Brazil in 1973, at the height of the regime's brutality, and declared the economic experiment "a miracle."" In Uruguay the military had staged a coup in 1973 and the following year decided to go the Chicago route.

Lacking sufficient numbers of Uruguayans who had graduated from the University of Chicago, the generals invited "Arnold Harberger and [economics professor] Larry Sjaastad from the University of Chicago and their team, which included former Chicago students from Argentina, Chile, and Brazil, to reform Uruguay's tax system and commercial policy. The effects on Uruguay's previously egalitarian society were immediate: real wages dropped by 28 percent, and hordes of scavengers appeared on the streets of Montevideo for the first time. (3)

And the revolution spread:

Next to join the experiment was Argentina in 1976, when a junta seized power from Isabel Perlin. That meant that Argentina, Chile, Uruguay and Brazil—the countries that had been showcases of developmental ism —were now all run by U.S.-backed military governments and were living laboratories of Chicago School economics. According to declassified Brazilian documents just released in March 2007, weeks before the Argentine generals seized power, they contacted Pinochet and the Brazilian junta and "outlined the main steps to be taken by the future regime. (3)

And despite the human atrocities throughout this period, Milton Friedman is still considered to be a hero.